Pupils, teachers and staff of CCMA pictured with representatives of Dublin City Council and and ‘Pride of Place’ adjudicators. (Photo, Martin O’Brien)

August 2018 - The CCMA was nominated by Dublin City Council for the national ‘Pride of Place’ awards. The IPB Pride of Place Awards, In association with Co-operation Ireland is an all-island competition that acknowledges the work that communities are doing all over the island of Ireland. Nominations are made by Local Authorities only, and the CCMA are delighted to be the nominee of Dublin City Council for this years awards. A very full programme of talks on the CCMA’s work, effect in the community and value to it’s participants, with lots of music from the orchestra, choirs, traditional groups and other vocal and  instrumental contributions took place on Tuesday 14th August. A very well organised event made a strong impression on the adjudicators, who talked about the talent of the participants and the passion of those who spoke at the event.

Read more on the Pride of Place awards here>>

Following adjudications in August 2018 (see opposite) the CCMA were delighted to receive the award for Best New Entry, Residential, at Croke Park in the presence of Lord Mayor Nial Ring. 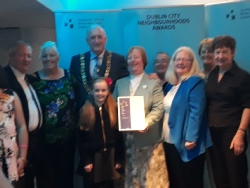 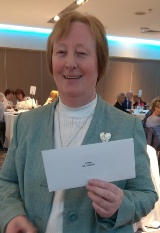 A proud Sr Bernadette shows the envelope indicating this very appreciated award. The award ceremony is in advance of the national awards to be held in Cork, November 2018.

High Praise from the Adjudicators

The winning entry is in respect of a project and place that is thoroughly inclusive and holistic in effect. The judges on their visit were very impressed by the intergenerational nature of the initiative and the way in which it brought together all members of the community. Activities have now been extended to assist many charitable organisations. The Group established in 2006 has grown from a School Orchestra/ Parents Orchestra to a Community Musical Society. This is no elitist enterprise; the effect on the wider community is immediately apparent.

t the IPB Pride of Place National awards held in Cork in November 2018 St. Agnes’ CCMA were named overall national winner in their category. The CCMA were delighted to be chosen by Dublin City Council as nominee, to be announced as nominees for the national final, and to be awarded overall winner in the creative place initiative.

The CCMA want to thank all those that have contributed to the success of the music project. Participants, tutors, office and premises staff, and the many volunteers who contribute to the events throughout the year. 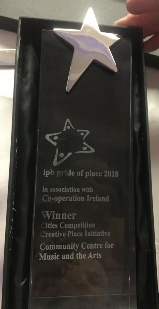